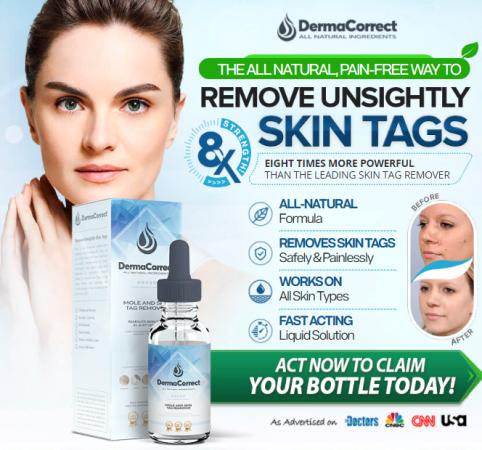 Check the price
In stock
Request a call
Description
-70%

(Health, Tuesday, March 30, 2021 ) - When new mom Jane was pregnant with her now, 11 month old daughter Francie, she started to develop something she never had before, skin tags. The unsightly blemishes sprung up in sensitive areas, and she didn't know what to do. Her mom, who also suffered from skin tags recommended she try a dermotologist. Jane saw Dr. Amy White.

"I didn't really think getting skin tags was something I would have to worry about. My mom has them, but she didn't get them til later in life. I saw the painful and expensive procedures she had to go through to get them removed, and they still left scars! So, when I went to see Dr. White, I asked about alternatives. She suprised me, she told me about an all natural cure I could use at home DermaCorrect . She showed me dozens of photos of people it had helped and assured me I could count on it working quickly, painlessly, and without leaving the scars my mom suffered from" - Jane, 32

Jane is enjoying having her smooth skin back thanks to DermaCorrect.

We sat down with Jane and Dr. Amy White, to ask them more about DermaCorrect and how it works.

Health Magazine: Dr. White, why has finding an alternative to traditional removal methods been so important?

Dr. Amy White: I've seen a huge change in the 10 years that I've had my practice. And my partners have as well. People are more interested in natural remedies. They want something that is free of chemicals, harsh side effects, and the unknown. They are looking for cures that are healthy for their bodies. To be honest, burning, freezing and surgery are the only ways we dermotologists had of removing skin tags and moles in the past. That just seemed so barbaric to me. I knew there had to be another way.

Health Magazine: Who do you think can benefit from DermaCorrect?

Dr. Amy White: Honestly, anyone who is suffering from skin tags and moles. DermaCorrect works on all skin types. Because it's all natural, I've even recommended it for some of my younger patients. It works much better with my older patients than traditional methods. Because their skin is so thin and fragile, DermaCorrect works without harsh chemicals, burns or surgery. It protects their skin and helps them find relief without damaging it.

Health Magazine: How expensive is DermaCorrect compared to other methods?

Jane: (chuckles) Well, I love Dr. White, but just one visit to her cost me more than the entire bottle of DermaCorrect. And that didn't include any treatment. The other options we talked about, were surgical, because my skin tags were in sensitive places, they had to be careful or there was the posibility I could lose sensation. We were talking tens of thousands of dollars. I would say DermaCorrect was cheaper, by leaps and bounds. I loved how it worked so much that I bought several bottles for the future occurances, for both me, my mom, and my sister, who admited she also had gotten skin tags when she was pregnant. We are all very grateful for Dr. White's recommendation!

Health Magazine: That's impressive! Could you explain how it works?

Dr. Amy White: There isn't much to it, and that is the appeal of it all. Instead of costly and lengthly procedures, all you do it apply DermaCorrect to the affected area and it starts working in as little at 8 hours! Some stubborn moles and skin tags may take a few weeks to dry up and fall off. You apply it to the growth you want to remove and then cover with a bandage. Repeat this for three days, washing the area with hydrogen peroxide before each new application. The DermaCorrect will cause inflammation at the base of the growth, which usually turns pale, then falls off, leaving no scaring and no damage to normal tissue. I have the seen DermaCorrect do a better job with moles in difficult places than conventional surgery. The application is fool proof, and so easy anyone can do it.

Jane: I love it, because I can just get back to my life, and focus on raising my beautiful daughter without worrying about the feeling uncomfortable in my own skin!